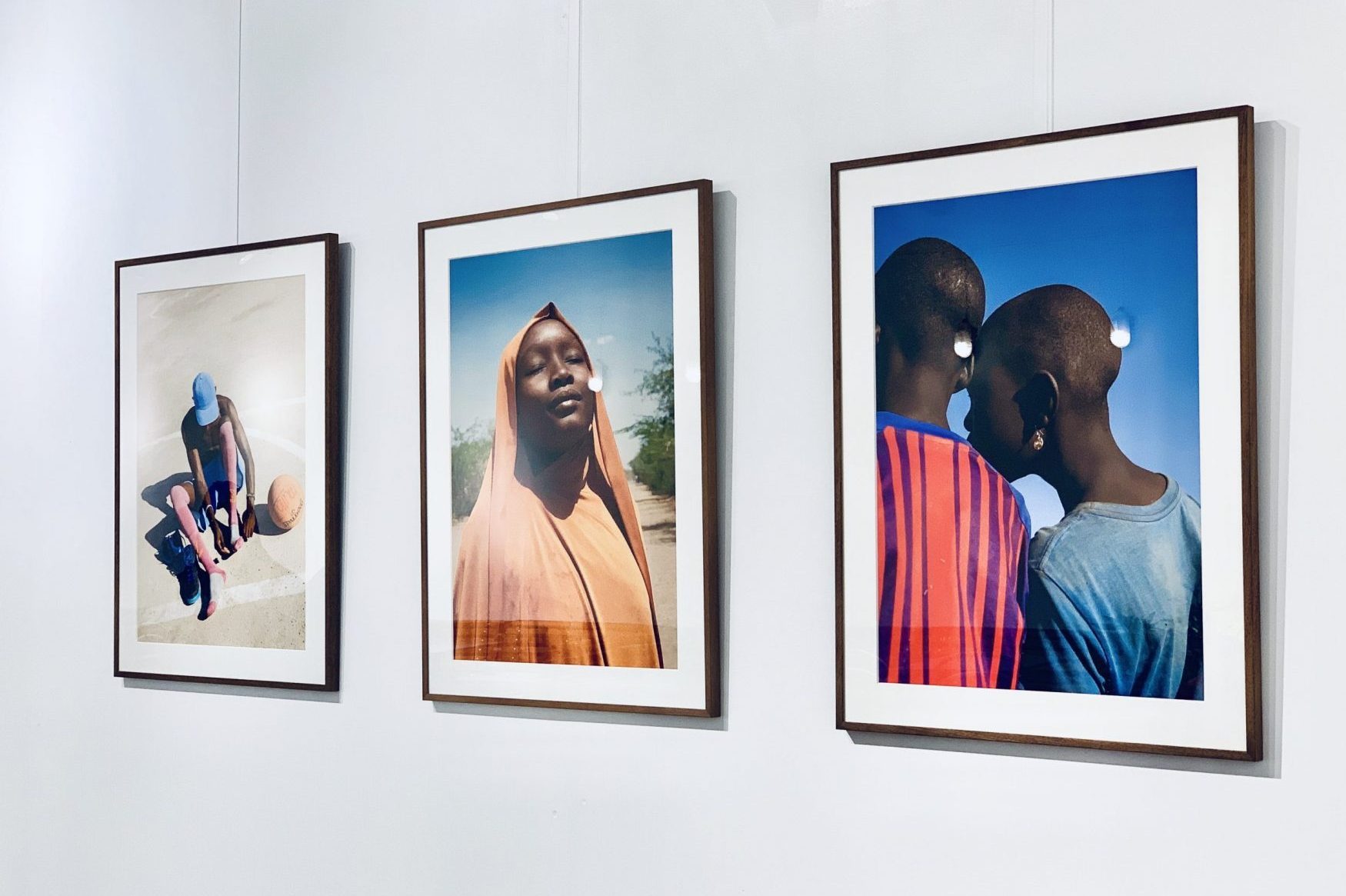 In our first exhibition of 2020, we reflect on two years of OSCAM. In the past two years we have created so many amazing exhibitions with young talented creatives, established artists and our OSCAM partners, that we want to take a moment and reflect on the beautiful and hard work we have all done. During this expo you will be taken on a trip down memory lane with the highlights of OSCAM, seen in retrospective.

Creative director, stylist and DJ Richard Soesanna, created ‘Home coming’ in honour of his ill grandmother, who introduced him to religion. When Gospel Festival Amsterdam asked him to create a series of photo’s with the topics coming home, feeling at home, fashion and religion, his muse was quickly chosen. In a mix of her own clothes, Gucci and Balenicaga, she looks stylish, relevant and full of life as the model, beautifully captured by photographer Darnell Rozenblad. ‘Home coming’ was presented during Gospel Festival Amsterdam at the Johan Cruijff Arena.

Raquel van Haver refers to her work as ‘loud’ paintings that sympathetically portray people on the fringes of society. She works on burlap, combining oil paint, charcoal, resin, hair, paper, tar and ash in heavily textured compositions. The paintings explore race and identity, drawing from African, Western, Caribbean and Latin American cultures within her community in the South-East of Amsterdam, Netherlands.

This painting Dogon vs Noh, visible in OSCAM, was meant to be a cover for an EP. Unfortunately this project was cancelled. However the drawing and the art of Raquel van Haver remained. The artwork is typical for the way Raquel works.

Bas Kosters – Looking for a map of magic place

‘Looking for map of magic place’ is a series created in Tokyo during a 2,5 month long research period. From a very personal point of view lead by intimate fascinations and emotions, yet still looking towards the outside world, Bas Kosters tries to capture the different meanings of loneliness. There is a certain beauty in being isolated, in being in solitude: gentleness and modesty.

The viewer is invited to the world of Bas Kosters, one of the leading (fashion) designers in the Netherlands. Koster’s work is beyond just colourful tapestries and sketches, but rather celebrates the value of textiles. Bas aims to create art from everyday materials, to treasure and to keep forever. His artworks are a sign of resistance to our consumer culture where in shopping has become a crucial ritual for shaping and transforming our identities. In the world of Kosters, nothing will ever be discarded and made to last a lifetime.

‘Resist! Take a stand in fashion’ is a photography exhibit curated by Mila Ernst (Modemuze), Lisa Whittle (Modemuze) and Marian Duff (OSCAM). They asked the photographers Carin Verbruggen, Marques Malacia, Alexander van Keulen en Yves Saidi to reflect on ‘resistance’ in fashion together with four young curators from Modemuze. The teams have shown their vision, by creating new photographic work and telling new and old stories based on the heritage collection of Modemuze. Carin’s series as shown in OSCAM are named ‘A Glint in the Eye’. Marques’ selection is named ‘For Monquichot – For What it’s Worth’.

Remsen Wolff was struggling with his gender and identity at the start of the 1990s and fascinated by the beauty and the talent of a hundred special girls and queens in New York. He personally chose them and photographed them as his muses. The exquisite photos that Wolff made of them have led to the beautiful collection “All American Girls” curated by Hedy van Erp for FotoFestival Naarden which was shown at OSCAM during PRIDE 2019.

Remsen Wolff died in his birth place New York. He left his photo archive to his last assistant, the Dutch photographer Jochem Brouwer. For ‘Retrospective’ we chose the portraits of ‘Clare Scandelle (1994)’ and ‘Constance (1992)’.

With Costume, the artistic family Richters, OONA and Soraya Basiran gave their own interpretation to existing costumes from Nationale Opera & Ballet. The costumes were made in the costume department of Dutch National Opera & Ballet at Waterlooplein in Amsterdam and had roles in various operas and ballets. They stand for elegance, freedom of movement and style. The new art pieces from the artists based on these costumes are linked to several ateliers within the Decoratelier Nationale Opera & Ballet.

Although visual artist AiRich is now making a collage for Costume, she usually uses portrait photography to tell stories, focusing on visual collaborations and projects at home and abroad. Afrofuturism plays an important role in her work.

Black Girl Church started off as a love letter to black girls, and turned into an intimate portrayal of some of the realities of black beauty and the dynamics of the black beauty industry, sharing a glimpse of what it’s really like for a black woman to exist in the world. Felicity van Stroe (Entitled. agency) and Nsimba Valene Lontanga (Meer Dan Modemeisje) hosted the film screening in OSCAM. During the event photographer Coco Olakunle exhibited pictures of women of colour she made in Africa.

Coco Olakunle is a photographer and director with a background in Human Geography and travels around the globe to capture inspiring humans.

For this exhibition, curator Marian Duff of OSCAM connected the talented photographer Alexander van Keulen with the Bijlmer. The exhibition consists of 14 photographs, with a number of faces from the Bijlmer and costumes from the depot of the Dutch National Opera & Ballet. The costumes were made in the costume department of Dutch National Opera & Ballet at the Waterlooplein.

Tirino Yspol exhibited with work from fashion label SMIBSALAND in OSCAM in 2018. Besides his work for fashion label SMIBSALAND, he also works together with fashion designer Jessica van Halteren on multiple projects for the label MULAS HYBRID HAUS. They joined forces with multidisciplinary artist Mila van der Linden, who is known for her unconventional visual language. Together they found new ways of presenting fashion. Through strong individual stories, trippy visuals, graphics and sound, they shift the attention from the product to the people. This work is part of their continuous project “Dark Love”. Focussing on self-love vs. narcissism, alternative relationships and individual courtship. It contains a series of six individual love stories, told in six different atmospheres.

Bavaria’s 8.6, also known as ‘Aggie’, has been part of the culture and the local drink for years by residents of the Bijlmer. Ike Melchizedek wanted to shape his love for ‘Aggies’ in a shape of a heart, that is now shown at OSCAM and titled ‘Open Your Art’.