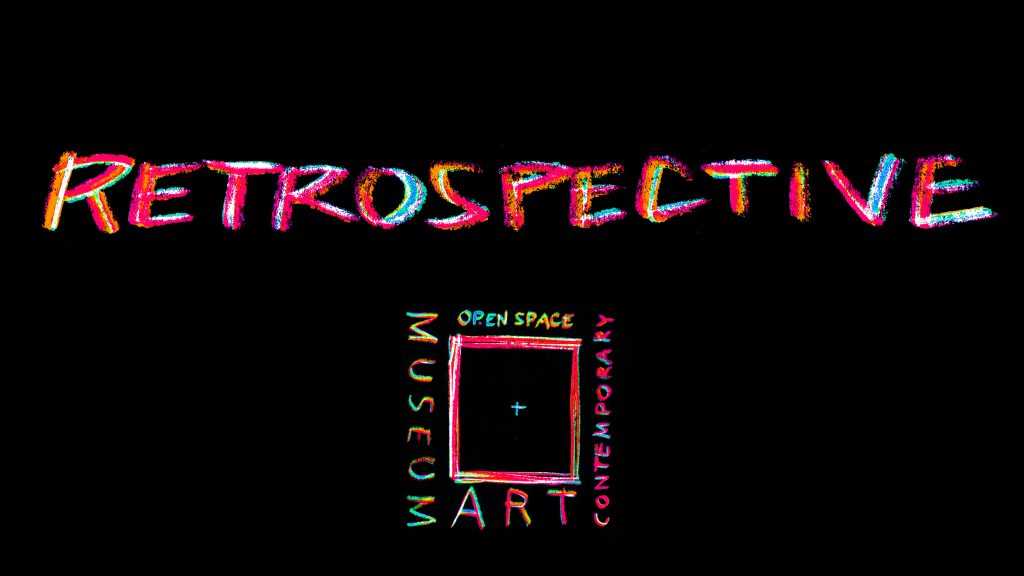 In honor of our fifth anniversary on November 25th, we present the exhibition ‘OSCAM 5 YRS Retrospective’, inspired by the versatility that OSCAM has shown over the past years.

OSCAM is a bridge, a crossing point, a museum where different cultures meet. A place of beauty, talent, interdisciplinarity and above all, dialogue. In this exhibition, everything that OSCAM stands for is reflected. On show are presentations of art, fashion, design, craftsmanship and development, by twelve artists who fit OSCAM very well.

The exhibition is more than a retrospect on the past five years as we showcase some of the artists and artworks we have shown before, but also a glimpse of the future, as we invited some new names to our space.As an ode to the area in which our museum is rooted, the majority of artists are born and raised in Amsterdam Southeast or have a strong connection with this part of the city. Together we tell the story of OSCAM in a way that suits us best. 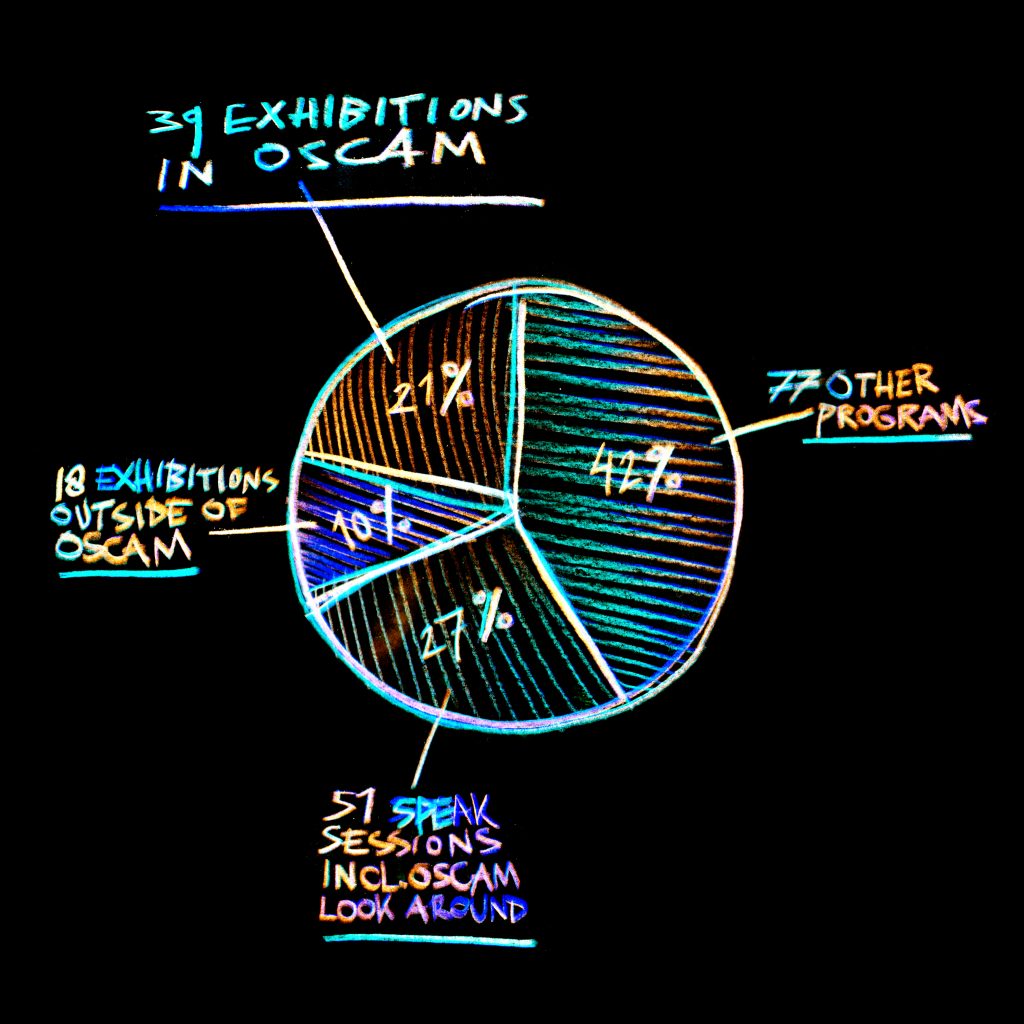 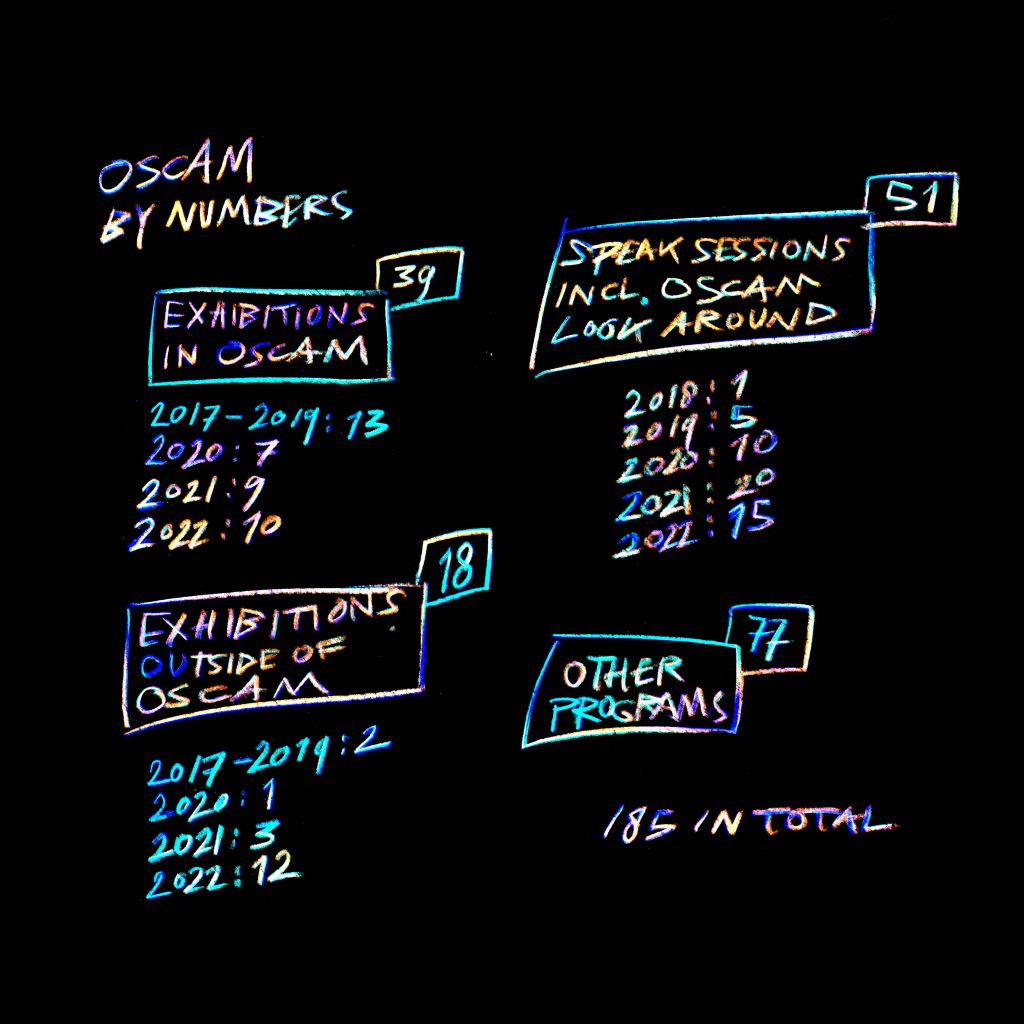 Robbert Doelwijt Jr. | One of the most talented self-taught videographers from Amsterdam Southeast. Like no other director we know, Robbert masters the balancing act of creating gentle and atmospheric narratives while maintaining a clear-cut message. He always seeks out the personal and emotional, crafting stories that can make any subject relatable. For OSCAM he made multiple videos, showing our stories and personality in a way only he could. Watch and listen…

Christine Kipiriri | A fashion designer and visual artist from Amsterdam Southeast who stands for longevity and sustainability. Her curious spirit, appreciation for fine detail and her double cultural identity play a significant role in all her designs, making each piece unique.

On show are two powerful and colorful collages, showing what’s going on in her mind. Her artistic vision sparked her own brand ‘Women of War’ that in 2022 became ‘WOW intimates’. Her collections challenge our vision of materiality and newness, as she’s mainly working with vintage and secondhand clothing.

Jan Hoek | A photographer, writer and artist, who is always inspired by the beauty of outsiders and keen to collaborate intensively with people that normally are overlooked. Together they create a new image. In the universe of Hoek the ‘normal’ people are the strangers and the outsiders are the funky rulers of this planet.

Duran Lantink | A fashion designer with a playful, inclusive vision for the future of sustainable fashion. With his innovative approach to upcycling, Lantink’s zero-waste philosophy uses pre-loved garments and deadstock fabrics to create fashion as agenda-setting as it is ethical.

Together Jan & Duran created ‘Sistaaz of the Castle’ a series of photographs and fashion collection based on the appearances of the colourful transgender sex workers of Cape Town, South Africa – and their ability to make the most exuberant creations from everything they find.

Brian Elstak | A visual artist, illustrator, painter, children’s book writer and connector between all sorts of creatives and storytellers. He is also part of art collective, Lowrey Foley McClane (LFMC).

The arcade machines on show are part of the exhibition L.O.B.I ARCADE, an ode to the art forms of games, hip hop, comic books and cartoons, topped off with a sauce of pop culture. The machines tell stories that are recognizable to many, but simultaneously offer a new perspective for some.

Allysiavd | An interdisciplinary artist based in Amsterdam Southeast, with a background in Fashion Design and Interdisciplinary Social Science. She takes inspiration from her vibrant, creative environment in Southeast, academic and philosophical texts, and fascinations of Surinamese culture.

Kenneth Aidoo | A painter from Amsterdam Southeast who sees his paintings as film stills: ‘they have to tell the beginning, middle and end of a story’. The vehicles for these stories are portraits, varying in themes and media, but sharing their pure composition: the bust of a single figure in front of a wash of solid color.

This series is about Black romantic films, movies in which Black love comes first. Kenneth: “I personally find it strange that these films have never managed to create a foothold like many other films.”  The details in the compositions reflect the biography of the people portrayed. Some are instantly recognizable as Black icons, others are serene in their anonymity.

Sqeleton Studio | A visual artist and designer based in Amsterdam Southeast. Guided and inspired by the infinity of shapes, she is always on the outlook for new uniqueness and aesthetics. By observing the environment closely, Shivonne discovers stories behind shapes. By combining them with spaces and materials, her designs result in complex and dynamic installations.

Her work is a constant quest for the best way to translate handwritten texts into tangible art pieces. This results in what she calls ‘Sqeletons’. The handmade ‘Sqeletons’ represent the characteristics of handwritings and stories such as personal letters and postcards, placed in new tangible dimensions like wall art, tapestries and furniture.

Roxane Mbanga | A Guadeloupian-Cameroonian-French multidisciplinary artist and storyteller, currently based in Amsterdam. Through her installations, she highlights the perception of ‘self’ and ‘the body’. Under conditions of both invisibilization and hypervisibilization, she questions the position of black women in public spaces and provides space for public conversations around Afro-diasporic identity.

On show is Roxane’s very personal installation ‘NOIRES’, a place she calls her home. It is an outward expression of how it feels to be living as herself. The cube adapts to the space it inhabits, accumulating new objects and stories in its wake.

Lawil Karama | A multidisciplinary artist with Ugandan, Dutch and German roots, currently living and working in Rotterdam. She uses modeling, sculpting, and experimenting with various materials to create installations. These highlight the beauty of marginalized communities, often through the challenges faced by people who live in the “diaspora”. This convergence mirrors her experiences in real life.

Her work is confrontational and challenges the traditional narrative. Using her omni heritage to step into a neutral space, she weaves other people’s stories and daily observations into her own work. These unheard voices are her guides through the contemporary world.

Stacii Samidin | A documentary photographer and filmmaker documenting the lives of minorities, the oppressed and of those with unorthodox lifestyles all around the world. Raw honesty, radicalism, and unfamiliar territories are the foundation of Samidin’s continuous life’s work called Societies. At the core, is the essence of seeing, hearing and accepting a human being without prejudice and judgment. She creates a shift in the individual and collective consciousness by challenging our perception and raising the voices of the unheard.

Shertise Solano | A Dutch Caribbean multimedia artist with a background in theater. With her body as principal collage element, she builds an ever-transforming world full of ecstatic mythical figures in undulating motion; a world without time or place, beginning or end.

In a series of short videos, Shertise performs as a shadow, dealing with energetic powers that are invisible to human eyes. She undergoes all kinds of transformations, becomes a fertility symbol and floats around in an endless cosmos. Shertise’s playful yet macabre films present half human, half animal figures; shadows that live inside her.

Patta | Out of love for streetwear, Patta was born in 2004 and grew up as a shoe and clothing store owned by Edson Sabajo and Guillaume “Gee” Schmidt in Amsterdam. Patta is now much more than a store; it is an internationally respected brand that is spread across different disciplines in and outside of Amsterdam through collaborations.

OSCAM and Patta worked together on the 2020 exhibition ‘We are here forever. Do you understand?’ The exhibition was a response to developments in the art scene where institutions were in surge of POC focussed art exhibitions in The Netherlands. A desire arose to curate a show which aimed to step away from the opportunistic fascination with Black art and instead wants to solidify the notion of Black art as part of the everyday societal space. To strip non-white art of it’s exoticism and normalise its presence. 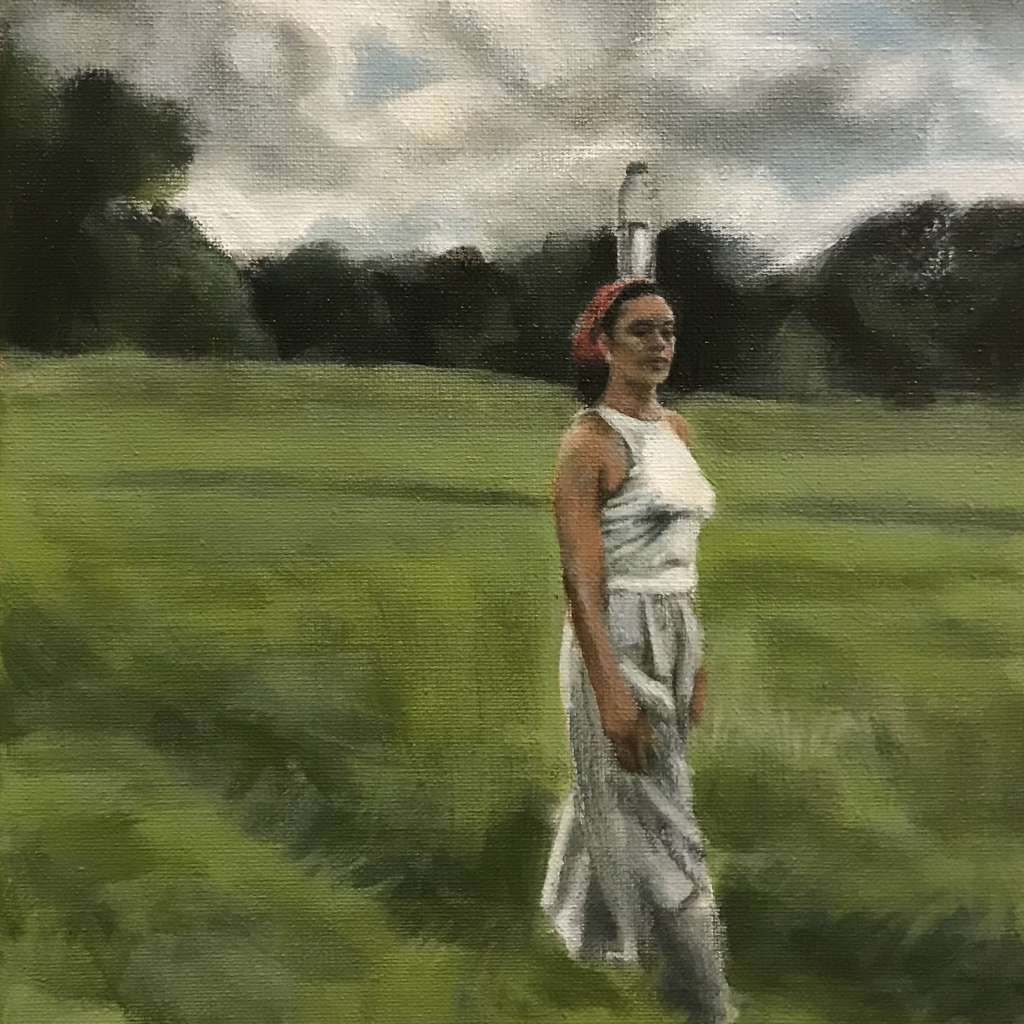 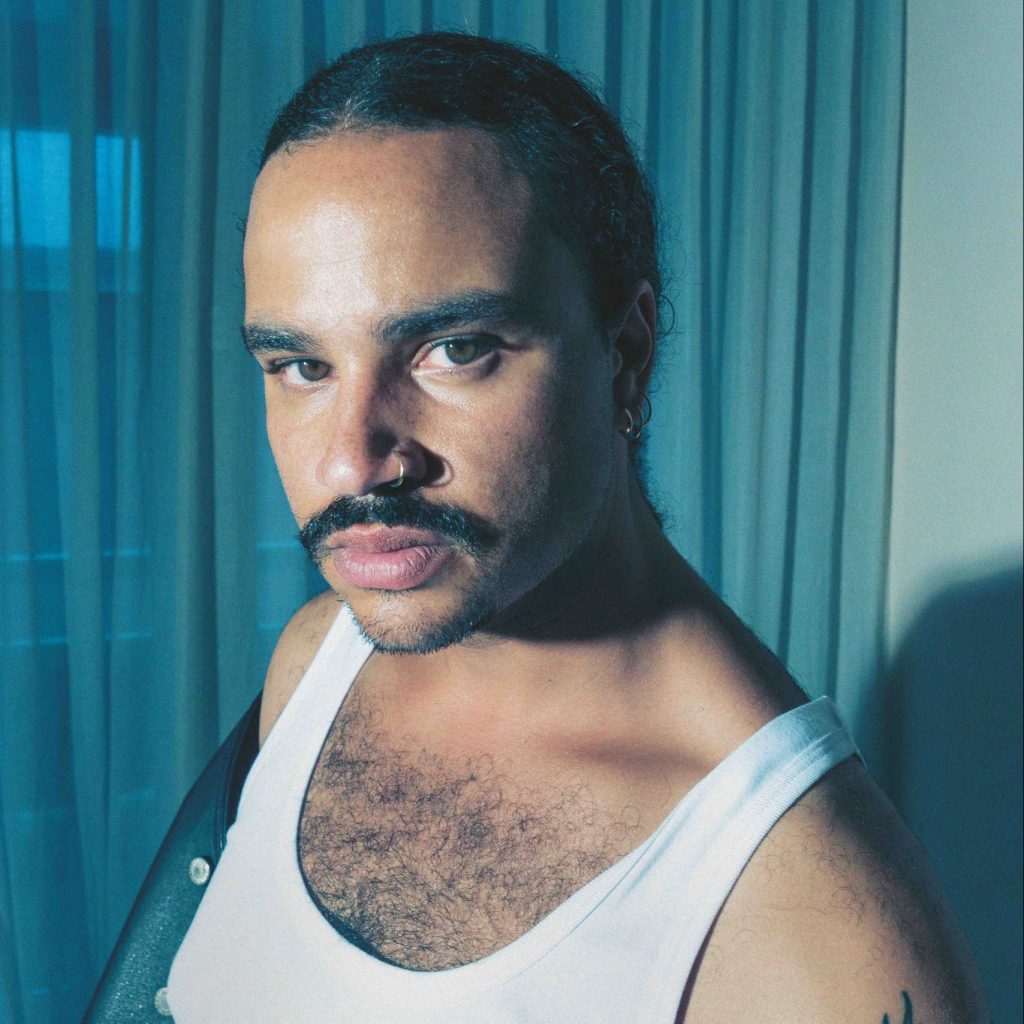